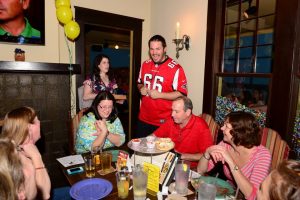 Thursday April 11, 2013 – Our 3rd Annual Celebrity Server Night was April 11, 2013, at Mellow Mushroom in Gainesville. It was a night filled with fun, food and prizes! All tips and 20% of sales from the night went to the Edmondson-Telford Center for Children to help stop child abuse.

The celebrity servers worked hard and did a fantastic job to make sure the customers had a special night! We had many great servers:

We would like to thank the generous Mellow Mushroom Owners, John and Heather Bush, and their amazing staff for making this event possible. As well as, GTO 2000, Wells Fargo Advisors and the many customers who came out to make this night a HUGE success! And finally a BIG SHOUT OUT to our Celebrity Servers – they were all AWESOME!!

Stand with us Our mission becomes action through people that are passionate about defending the innocent and bringing criminals to justice.
How to Help
You're Invited to Grow a World With No Child Abuse
Learn More